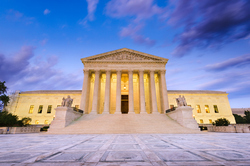 The United States Supreme Court is set the hear a slate of upcoming cases including one particular pair of lawsuits that could have an impact on the future of asbestos cancer litigation across the country. Although not directly hearing asbestos mesothelioma claims, the Supreme Court will take up claims centered around which types of cases out-of-state courts may take under consideration when those claims involve multiple defendants.

One claim, Bristol-Myers-Squibb Co. v. Super. Ct. of Cal., could severely limit out of state plaintiffs’ rights to join claims joined with residents in California, a venue often seen as “plaintiff friendly” due to its robust consumer protection laws. Often times, large numbers of plaintiffs’ product liability cases are handled in multi-district litigation (MDL) that help streamline discovery and motion processes to move the lawsuit along in a more expedient manner.

The second case, BNSF Railway Co. v. Tyrrell, was brought on behalf of a deceased railroad worker by his surviving wife alleging hazardous chemical exposure caused her husband’s deadly cancer. The plaintiffs in Tyrrell allege injuries occurred in South Dakota, Minnesota, and Iowa but brought their claim in Montana under the Federal Employees Liability Act (FELA) despite being out-of-state residents.

Both the California and Montana state supreme courts ruled that plaintiffs could proceed with their claims in the respective jurisdictions. In Bristol-Myers, the California Supreme Court ruled the defendants marketing, distribution, and research activities in California provided the necessary connection for out-of-state residents to bring claims. As a federal matter, the Montana Supreme Court ruled it sufficiently empowered to hear the matter.

Should the defendants prevail in Bristol-Myers, asbestos cancer victims suing multiple out of state defendants arguably would no longer be able to name all defendants in one suit, in one court. Should this extreme scenario play out, plaintiffs would need to file separate lawsuits against individual asbestos companies to recover for lost wages, pain and suffering, and other damages.

As a result, the cost for plaintiffs to bring asbestos cancer lawsuits would drastically rise, making it more difficult and burdensome for victims to hold wrongdoers accountable and get vital compensation. Traditionally, plaintiffs can name several defendants for alleged asbestos exposure and courts will apportion liability amongst responsible parties.

However, separate suits would create less certainty for even defendants, with some parties having to pay more than their fair share in a significant plaintiff’s verdict. The upcoming cases are just a few important events that could seriously impact plaintiff’s rights in asbestos cancer lawsuits and other tort claims against multiple out of state defendants.