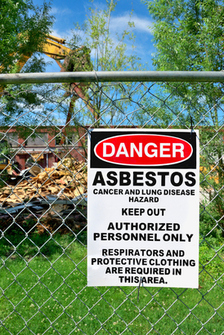 A U.S. District Court judge recently sentenced a Cleveland businessman to almost five years in jail and imposed a $7.8 million fine for the defendant’s failure to properly abate his property of asbestos before demolishment. The defendant, a 53-year-old ohio man, will spend 57 months in prison for violating the Clean Air Act and several counts of fraud committed against a Louisiana company by submitting false invoices.

According to reports, the defendant owned and operated several waste disposal companies throughout the city of Cleveland and the state of Ohio including Reach Out Disposal, All Points Rubbish Disposal and Axelrod Rubbish Recycling. Prosecutors alleged the defendant leased the National Acme plant in 2011 and subsequently purchased the property in 2012 with the intent to demolish the building and parcel out the scrap metal for sale.

The defendant failed to obtain a permit to demolish the factory but went ahead with the project anyways, creating an open air dump in a residential area with a school nearby. The rubble dumped at the waste site contained asbestos fibers and contaminated the air, a serious violation of The Clean Air Act that put local residents at risk for potentially deadly health conditions like mesothelioma.

Approximately $5.9 million of the restitution ordered by the court will go to the city of Cleveland for its part of the cleanup. Another $800,000 was earmarked for the Environmental Protection Agency (EPA) for its initiatives in the project.

Following the defendant’s indictment in 2014, the Department of Justice released a statement, reading in part, “We will not allow our neighborhoods to be used as garbage dumps,” Dettelbach said. [defendant’s] “actions show his total disdain for the law and for the people who live near the factory. He will be held accountable for his actions.”

“Thousands of tons of garbage were dumped illegally near a residential neighborhood,” Attorney General DeWine said. “This behavior is inexcusable. Residents have to deal with this significant environmental and health threat, and they deserved to see those accountable brought to justice.”

Once commonly used in many industrial, commercial, and military applications, asbestos was coveted by many companies for its heat resistant properties, as well as its inexpensive costs. Sadly, thousands of innocent people developed mesothelioma, a rare and aggressive form of cancer, by coming in contact with the substance. Despite knowing for many years about its dangerous properties, many large and powerful companies continued to used asbestos in various applications but chose not to disclose the risk to the general public or workers coming in contact.