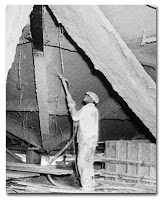 Insulation is used in a host of applications and has long been associated with asbestos.  At one time, the workers who installed insulation were often referred to as “asbestos workers” because the majority of insulation produced contained asbestos.  Asbestos was used in insulation because of its unique properties of fire resistance and heat insulation.

Asbestos insulation could be found and is sometimes still found around boilers, generators, furnaces, ovens, pipes and electrical wires.   Construction insulation products that contained asbestos include:

As a result, anyone working around or installing insulation for this type of equipment could have been exposed to asbestos.  This could include insulators, construction workers and those who worked in and around insulation factories.

“Asbestos workers” would often grind, cut and sand the asbestos containing insulation to fit a particular piece of equipment.  As a result, this insulation activity would create a major asbestos exposure to the insulators and surrounding workers because of the airborne asbestos fibers either inhaled or ingested.  Workers, unfortunately, were unaware that asbestos was hazardous and did not wear any protective gear even though many insulation manufacturers knew exposure could cause serious illnesses.

Exposure to asbestos containing insulation can lead to the development asbestos related diseases including asbestos-related lung cancer and  and mesothelioma.  Attorney Michael Throneberry has personal experience with mesothelioma from his father-in-law’s death. In fact, that’s what led him to devote his law practice to asbestos litigation. We understand the physical, financial and emotional impact of asbestos disease on the victim and the family. Call Throneberry Law Group at 888-506-1131 for a no-obligation consultation and compassionate, proven representation.